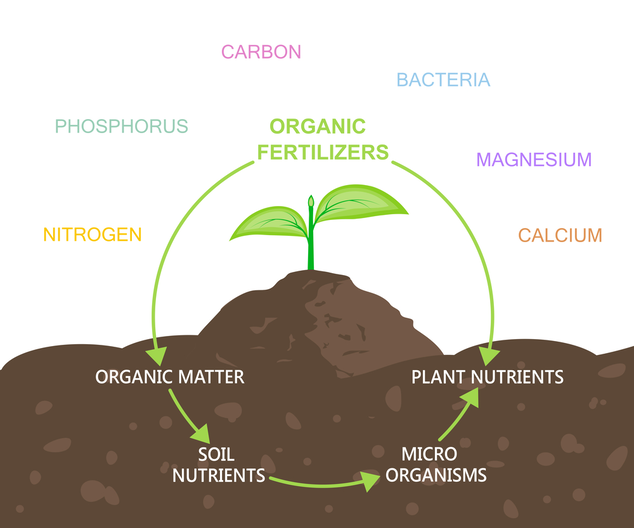 1. Introduction
Fertilizers in the broadest sense are product that improve the levels of available plant nutrients and/or the chemical and physical properties of soil, thereby directly or indirectly enhancing plant growth, yield, and quality. Fertilizers are classified as follows in terms of their chemical composition:
1) Mineral fertilizers consist of inorganic or synthetically produced organic compounds.
2) Organic fertilizers are waste products from animal husbandry (stable manure, slurry manure), plant decomposition products (compost, peat), or products from waste treatment (composted garbage, sewage sludge).
3) Synthetic soil conditioners are products whose main function is to improve the physical properties of soils, for example, friability and water and air transport.
The following categories are distinguished with respect to nutrient content:
1) Straight fertilizers generally contain only one primary nutrient.
2) Compound (complex or multinutrient) fertilizers contain several primary nutrients and sometimes micronutrients as well.
3) Micronutrient fertilizers contain nutrients required in small quantities by plants, as opposed to macronutrients; quantities range from 1 to 500 g ha−1a−1.
Finally, fertilizers can be classified as solid or liquid fertilizers and as soil or foliar fertilizers, the latter being applied exclusively by spraying on an existing plant population.
History.
Fertilizing substances were applied even in antiquity. Their use can be attributedto the observation in nature that plants developed especially well in locations where human or animal excreta, ash residues, river mud, or dying plants were left. For example, the Egyptians knew about the fertility of the Nile mud, and the Babylonians recognized the value of stable manure; for example, Homer mentions manure in the Odyssey. Pliny reports that the Ubians north of Mainz used “white earth,” a calcareous marl, to fertilize their fields. The Romans acknowledged the advantages of green manuring, cultivating legumes and plowing them under. At the end of the first millenium, wood ash was much used as fertilizer in Central Europe. Not until the beginning of the 19th century did guano, at the suggestion of Alexander von Humboldt (1800), and Chilean caliche, on the recommendation of Haenkes (1810), come into use as fertilizers. Up to that time, however, it was still believed that the organic matter of soil, humus, was the true source of plant nutrition.

Around 1800, the nutrition problem entered a critical phase in Europe. In 1798, Malthus set forth his pessimistic theses, saying that the quantity of food could increase only in arithmetic progression while the population grew geometrically. Combining results obtained by others (Sprengel,Boussingault) with his own pathbreaking studies, J. von Liebig set forth the theoretical principles of plant nutrition and plant production in Chemistry in Its Application to Agriculture and Physiology (1840). He took the view, now considered obvious, that plants require nitrogen, phosphate, and potassium salts as essential nutrients and extract them from the soil. Liebig’s mineral theory was well supported by experimental data of J. B. Boussingault (1802 – 1887) in France. He and also J. B. Lawes(1814 – 1900) and J. H. Gilbert (1827 – 1901) in England showed that plants benefit from inorganic N fertilizers. Liebig thus became the founder of the theory of mineral fertilizers, and his doctrines led to an increasing demand for them. A number of companies were subsequently founded in Europe to produce phosphate and potash fertilizers. Superphosphate was manufactured for the first time in 1846, in England.

The science of plant nutrition is situated between soil science and plant physiology. It comprises the definition of the elements nutritive for plants; the uptake of plant nutrients and their distribution in the plant; the function of the nutritive elements in plant metabolism; their effect on plant growth; yield formation and quality parameters in crops; soil nutrient exploitation by plant roots; factors and processes that control the plant nutrient availability in soils; toxic elements in soils and their impact on plant growth; the application of plant nutrient carriers (fertilizers) and their turnover in soils; nutrient balance; and the maintenance of soil fertility.

Plant nutrition is considered mainly from two aspects, an agronomic one and an ecological one. The former is focused on the question of fertilizing soil as an efficient means to increase crop yield and to maintain or even improve soil fertility. The latter, the ecological aspect of plant nutrition, is concerned with the nutritive condition of a soil and a location and with its effect on plant growth and plant communities. Since fertilizers are the topic of this article, the agronomic aspects of plant nutrition are treated with greater depth.

The science of plant nutrition is closely associated with the science of soils. The latter comprises a broad field of scientific activity and thus cannot be considered here in all its facets. In this article only those problems of soil science relevant to understanding plant nutrition are treated.

Plant Nutrients
Definition and Classification
From a scientific point of view, the term plant nutrient is not especially precise. More appropriate is to distinguish between nutritive elements of plants and nutritive carriers. Essential nutritive elements for plants are the chemical elements that are required for a normal life cycle and that satisfy the following criteria: 1) A deficiency of the element makes it impossible for the plant to complete its life cycle. 2) The deficiency is specific for the element in question. 3) The element is directly involved in the nutrition of plants because of either its chemical or its physical properties. According to this definition, the following chemical elements are nutritive elements for plants: C, H, O, N, P, S, K, Ca, Mg, Fe, Mn, Cu, Zn, Mo, B. Further elements, such as Na, Cl, and Si, may affect plant growth positively, and there are particular plant species for which these elements are of great importance. Nevertheless, they are not essential nutritive elements for plants in the strict sense of the definition. Cobalt is required by some bacteria, e.g., by dinitrogen-fixing bacteria and thus may also benefit plant growth indirectly. Generally it is not the element itself that is provided to and taken up by the plant, but an ion or a molecule in which the nutritive element is present, e.g., C is present in CO2, P in H2PO− 4 , N in NO− 3 or NH+ 4 , and B in H3BO3. The particular molecule or ion in which the nutritive element is present is termed the nutrient carrier. In the case of metals, the corresponding ion or salts of ion species in question, e.g., K+, Ca2+, Zn2+, can be considered the carrier. In this sense fertilizers are nutrient carriers.

Ministry of Agriculture, Department of Agriculture and Cooperation, Government of India, New Delhi, vide their order Dated 24th March, 2006 included biofertilizers and organic fertilizers under section 3 of the Essential Commodities Act, 1955 (10 of 1955), in Fertilizer (Control) Order, 1985. These rules were further amended in respect of applicability, specifications and testing protocols vide Gazette notification 3 November, 2009. Abstract details of these rules, including the amendment are as follows:

Definition  Biofertilizers - Biofertilizers means the product containing carrier based (solid or liquid) living microorganisms which are agriculturally useful in terms of nitrogen fixation, phosphorus solubilization or nutrient mobilization, to increase the productivity of the soil and/or crop.

Organic Fertilizer - Organic fertilizer means substances made up of one or more unprocessed material(s) of a biological nature (plant/ animal) and may include unprocessed mineral materials that have been altered through microbiological decomposition process” “Non-edible de-oiled cake fertilizer” means substance obtained as residue after oil extraction (by expeller and/or through solvent extraction) from crushed seeds of non-edible oilseeds (such as castor, neem) for use in soil as fertilizer.

Some 13 elements, in addition to carbon (C), hydrogen (H) and oxygen (O), are known to be essential for plant growth and they can be divided into two groups:

The names macro- and micro- nutrients do not refer to relative importance in plant nutrition; a deficiency of any one of these elements can limit growth and result in decreased yield. It is therefore important to ensure that there is an optimum supply of all nutrients – if a plant is seriously deficient in, for example, potassium it will not be able to utilise fully any added nitrogen and reach its full potential yield and any unutilised nitrogen may be lost from the field. In the UK, two conventions are used as follows:

• For fertiliser contents and for recommendations, phosphorus is expressed in the oxide form phosphate (P2O5) and potassium as potash (K2O). Sulphur, magnesium and sodium also are expressed in oxide forms (SO3, MgO and Na2O).
• Soil and crop analysis reports usually show elemental forms for example mg P/kg or mg K/l.

Oxide or elemental forms are used in this Manual according to context.
Achieving the right timing of nutrient application is as important as applying the correct amount. Crop demand varies throughout the season and is greatest when a crop is growing quickly. Rapid development of leaves and roots during the early stages of plant growth is crucial to reach the optimum yield at harvest, and an adequate supply of all nutrients must be available during this time.

Excess application of nutrients, or application at the wrong time, can reduce crop quality and cause problems such as lodging of cereals or increases in foliar pathogens. Excessively large amounts of one nutrient in readily plant-available forms in the soil solution may also decrease the availability or uptake by the root of another nutrient.

Other elements found in plants, which may not be essential for their growth include, cobalt (Co), nickel (Ni), selenium (Se), silicon (Si) and sodium (Na). Sodium has a positive effect on the growth of a few crops. Some elements, such as cobalt, iodine (I), nickel and selenium are important in animal nutrition. These are normally supplied to the animal via plants, and must consequently be available in the soil for uptake by plant roots.

All these elements are taken up by plant roots from the supply in the soil solution (the water in the soil). They are absorbed in different forms, have different functions and mobility within the plant and hence also cause different deficiency, or very occasionally toxicity, effects and symptoms.

For good nutrient management, the total supply of a nutrient from all these sources must meet, but not exceed, crop requirement. Crop requirement varies with species (and sometimes variety of the crop), with yield potential (this in turn depends on soil properties, weather and water supply) and intended use (for example feed and milling wheat). Nutrients should be applied in organic manures or in fertilisers only if the supply from other sources fails to meet crop need. Where nutrients are applied, the amounts should be just sufficient to bring the total supply to meet crop need.

​ Matching nutrient supply to crop requirement involves several steps, some clear to the grower or adviser, others embedded in the recommendation system used. Recommendation methods used in this Manual allow the user to take account of sources of nutrients other than those applied, by using soil Index systems. In the case of phosphate and potash, recommendations are based on the expected crop yield. Using this Manual will help to match nutrient applications to crop need, maximising economic return and minimising costly nutrient loss to water and air.

fertilizer is medicine for farmland